Richard Horatio Edgar Wallace was a prolific crime writer and author of over 175 novels and 24 plays. He was born as an illegitimate child in London on 1st April 1875 and left school at age 12. Struggling with debt, he left South Africa for London and wrote thrillers for a living. In 1921, he signed with Hodder and Stoughton and became an internationally acclaimed author.

After attempting to bid to stand as Liberal MP in Blackpool in 1931, Wallace moved to Hollywood, where he started out on his career as a scriptwriter.

He is most known for the creation of the beloved King Kong, JG Reeder detective stories, and the Green Archer serial. More than 160 of his works have been made into movies.

Wallace had a unique way of coming up with his completed drafts. He used to dictate the content onto a wax cylinder, the dictaphones of the time, and his secretary typed it up, which was one of the reasons why his stories had a narrative style. 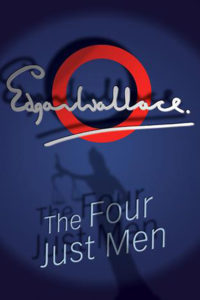 The book is about four vigilantes - Manfred, Gonsalez, Pioccart, and Theory. They are the titular four just men, who dedicate themselves to kill every wrongdoer they see as untouchable by law. They have the leading-edge technology, and even the Scotland Yard and other elite forces have no idea what the found contraptions are.

Read it For:
If you are a fan of [slightly cliched] hero movies where unidentifiable sins are punished, and superhero comics, then you will probably love this.

Don't Read it For:
The content is quite shallow. The characters are raw, and they story bluntly. But, if you were looking for a casual read, this book will give you a bang for the buck.

What makes this book stand out?:
The movie-like feel is very strong in the book. The book feels less like a novel and more like a movie script. Nevertheless, it is among the best Edgar Wallace books and also an Edgar Wallace, best seller.

The Angel of Terror 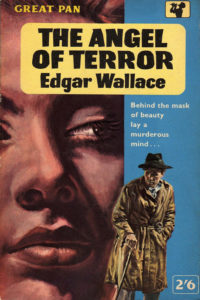 The book is about Jack Glover and his ensuing relationship with Lydia. Glover’s cousin has a bad case of an eccentric father and faces problems of a different level. Whereas, Lydia has to pay off her father’s creditors. The story weaves out when Glover proposes to lend Lydia the money.

Read it For:
Although not the sharpest arrow in his quiver, Wallace has done a great job with the story. The thrill will keep you on the edge of the seat.

Don't Read it For:
If you give a look of disapproval at seemingly repetitive writings, you can save your stare by not reading this. This is a classic Wallace with romance entwined from place to place.

What makes this book stand out?:
It is a classic thriller, and promises to keep you thrilled and has elements of romance sprinkled here and there. This is a very popular Edgar Wallace book. 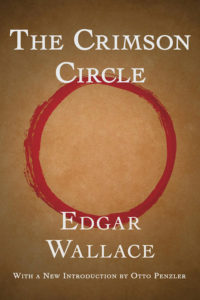 The Crimson Circle is a ruthless gang of criminals who have asked a tenth of a million pounds from James Beardmore. When he refuses to pay, it is his son Jack who finds him dead. Can Derrick Yale and Inspector Parr discover the secret of this notorious group of killers?

Read it For:
Read the book on the edge of the seat thrill. The book is fast paced and gripping. You cannot finish the book in one sitting.

Don't Read it For:
The thriller is quite depth-less and cliched. Since most of the thrillers and adventures don’t promise content, but, tonnes of adrenaline, this should not be an issue.

What makes this book stand out?:
It is, once again, a classic thriller. Wallace comes up with his own sense of justice through his characters. The book is also one of the Edgar Wallace, best sellers. 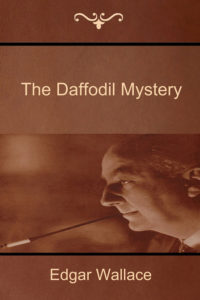 Mr. Thomas Lyne has made a cashier resign when he insults her. Having hired Detective Tarling to investigate another employee, Mr. Lyne gets some other idea. Tarling refuses to carry on with Lyne’s plan. But when Ms. Rider’s body is found, hands crossed on her breasts and adorned with daffodils, Tarling has no place else to turn to.

Read it For:
The book is a mystery where there are several suspects with varying degrees of suspicion, but each obvious clue leads to sign the suspect couldn't have killed the victim. And the cliffhangers are resolved via flashback - classic!

Don't Read it For:
The plot is too simplistic with very shallow characters. And, yet again, if a deep plot was not what you came for in the first place, you won’t be disappointed.

What makes this book stand out?:
Despite being slightly cliched and ridden with cliffhangers, this is one of those plots you can’t get enough of. Wallace has a catching writing style and keeps you hooked. 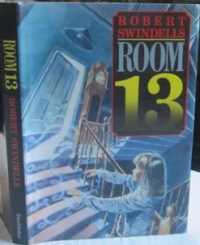 This is the first book in a series of six thrillers. JG Reeder is the protagonist and is recently released from prison. He takes off to warn a friend, Peter Kane about some shady businesses. It is the day of Kane’s daughter’s wedding, and Kane realizes now that the groom is nothing short of a sinister fraudster

Read it For:
The book promises great character development, being the first installment in the JG Reeder series. The story is also very gripping and aligned with Wallace’s traditional thriller habits.

Don't Read it For:
The plot is quite simplistic and not engaging enough. Although one might call this a tradeoff for character development, you could have expected a little more.

What makes this book stand out?:
It is the first part of a worldwide classic series, JG Reeder. The series, themselves, are Edgar Wallace best sellers.

The Mind of Mr. JG Reeder 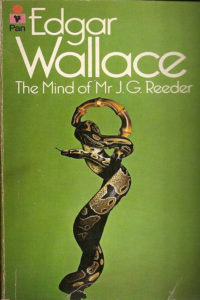 The book is the second of the six-part JG Reeder series. It is an anthology of Reeder’s popular crime deductions that have been memorable enough to have made it into his personal diary.

Read it For:
There is classic detective work all around. Each story is an adventure on its own, and each more gripping than the previous. Every one of the stories provides a delicious mystery to be devoured.

Don't Read it For:
The book is too short and too rapid to be accepted as a beloved character. But if you are already a fan of the franchise, this one will definitely not bother you.

What makes this book stand out?:
Just like Arthur Conan Doyle penned down popular instances of Sherlock Holmes in short stories, without having to go into detail about the background and setting, Wallace has done the same with his Reeder 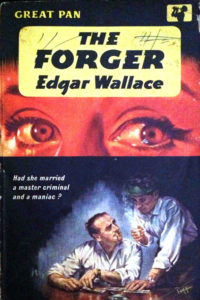 These forged notes are everywhere. Mr. Cheyne Wells has been given one as well. Peter Clifton is rich, but their origin is unknown, not even to his wife. One night, a ladder is found in her room, but it doesn’t look like it is her jewels they were after.

Read it For:
It is a classic whodunit, and twists and turns. The book is fast paced and gripping.

Don't Read it For:
The twists are a tad too much, with the plot getting out of hands, at times. The plot also gets a little confusing although it is very simplistic.

What makes this book stand out?:
The book, despite being a thriller, carries the weight of unique ideas for one. The book follows Agatha Christie’s popular style of an equiprobable suspect between the participants. 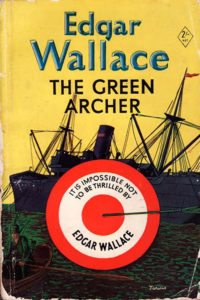 Abel Bellamy carries out his nefarious plans to imprison his brother Michael to get hold of all of the Bellamy Estate. Garr Castle is assisting Bellamy with the crime ring, and to silence things, Abel kidnaps his sister-in-law. Insurance inspector Spike Holland is also done with, as he enters the scene for investigation. Everything, now, is up to a leotard-clad archer to save the day.

Read it For:
The book is a classic example of the long arms of justice. People love it for the off-scene vigilante action. You can now sleep assured that the Green Archer is going to look after the rising crimes, while the local, corrupt officials turn a blind eye.

Don't Read it For:
The plot seems too childish at places. The Green Archer comes off as a ninja Robin Hood, and you will probably feel that you have seen the guy somewhere before.

What makes this book stand out?:
The book is immensely popular worldwide and is an Edgar Wallace bestseller, and arguably the most popular Edgar Wallace book.

The Clue of the Twisted Candle 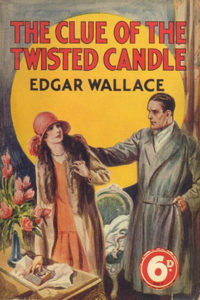 The renowned mystery writer John Lexman is accused of murder and has been imprisoned. His good friend, T.X. Meredith tries and proves his innocence.

Read it For:
This novel has in store all for the fans of classic mystery – a truly evil villain privileged with extreme wealth, a locked room murder, an intelligent, young investigator, a prison break, and a young woman.

Don't Read it For:
If you wanted an intriguing plot with occasional, if not frequent, twists, this might not be for you. The story is always moving unidirectionally with a clear demarcation between good and evil

What makes this book stand out?:
The book is home to clear and crisp storytelling. Although you can see that you could predict the outcome, you cannot put it down until you make sure of it for yourself.

The Fellowship of the Frog 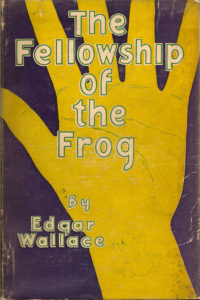 This is a humorous take on crime with the Scotland Yard chasing a frog with a mask. To make things spicier, nobody has ever seen the frog commit a crime. But, when one tracks him down, he has to pay for it.

Read it For:
As ridiculous as it may sound, looks like frogs make excellent criminals. Nimble, sneaky and meaning business. Crime clubbed with humor is every casual reader’s dream. The mystery and comedy are both strong with this one.

Don't Read it For:
The book can be shelved as a one time read. But, the concept itself sounds absurd, and the writing is, itself, very plain. Characters have no depth, and the plot has a weak foundation.

What makes this book stand out?:
The creative effort is very good with the writing of this book. If you start considering this as a standalone book, and will not affect other books and their writings, the book starts making sense as well as quenches your thirst for character development.