Alan Bradley was born in the year 1938, and he hails from Toronto, Ontario, Canada. He is a mystery writer and is popularly known for his Flavia De Luce series and another book by the name of ‘ the sweetness at the bottom of the pie.’ He was looked after by his mother, grew up with his two older sisters. His father abandoned the family when he was just a toddler.

In an early age itself he learned to read, and at a very young age, he began his writing career. He completed his education in engineering and went on to work as a radio and television engineer while designing electronic systems and building and developing them. He, later on, worked at the Ryerson Polytechnical Institute and then later in the year 1969, at the University of Saskatchewan where he developed the broadcasting Studio and went on to become the director of television engineering which lasted for 25 years. It was during the year 1994 that he took on the occupation of becoming a full-time writer. We bring you some of the top 10 books by Alan Bradley.

The sweetness at the bottom of the Pie 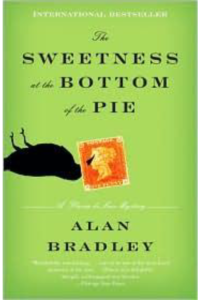 this book is about the story of an Aspiring chemist who is passionate about poison and takes on an investigation of a series of deadly events.

Read it For:
this book is the delight for those readers who have a taste for the unknown.

Don't Read it For:
if you can't handle the series of deadly plot involving poison, then this book is not recommended for you.

What makes this book stand out?:
the author interestingly weaves the various scenes with perfect brilliance with leaves the readers both appalled and delighted.

The weed that strings the hangman’s bag 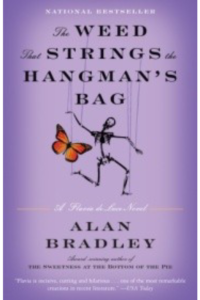 it's about the adventures of 11 year old girl with the Traveling puppet show.

Read it For:
the author demonstrates the zest for life amidst the mystery that is rampant amongst the puppet show group.

Don't Read it For:
it has a series of shocking death and tragedies that rock your world.

What makes this book stand out?:
the author brings out the brilliance of this young 11 year old girl and her discoveries of the real culprits behind the murder.

The dead in their vaulted arches 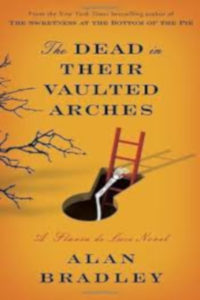 This is one of Alan Bradley  popular novels where a tall  stranger whispers is strange message into the year of young Flavia and just moments later he is pushed mysteriously under the train and dies on the spot.

Read it For:
this book sharpens your sleuthing skills that gets you guessing who the culprit is.

Don't Read it For:
you will unravel the darkest and deepest secrets that leads you to mysterious deaths.

What makes this book stand out?:
it is a unique book with spectacular scenes surrounded by family and friends who go out of the way to help you.

Speaking from among the bones 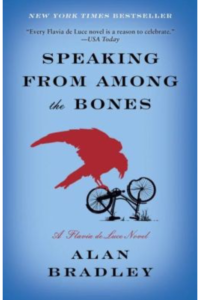 this is yet another detective story of young flavia De Luce  and her capability of digging up clues to find the culprits of the series of crimes.

Read it For:
this book keeps the Reader intrigued by the irrepressible determination of Flavia to Discover and find out everything about the mystery.

Don't Read it For:
the scenes are deadly with grotesque and masked men who try to loot a Patron saint’s tomb.

What makes this book stand out?:
it makes the readers to understand that there is no such thing as an open and shut case, it is a continuous series of events.

A Red Herring without mustard 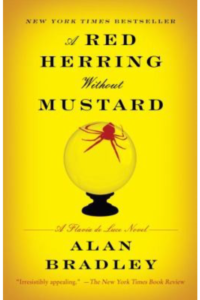 this is one of Alan Bradley Best sellers which brings out the cleverness of 11 year old fluid who solves mysteries as a delightful pastime.

Read it For:
Flavia makes a bold entry in this book where she uncover some odd new twists and Encounters shady characters and fishy clues.

What makes this book stand out?:
the main character of this book fights bravely to uncover the notorious Layabout unravel the darkest secrets.

As Chimney sweepers come to dust 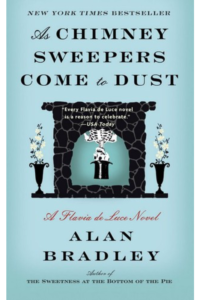 It tells about the cruelties faced by young Flavia when her mother's body is sent home from the Frozen Himalayan mountains.

Read it For:
it is the perfect book of mystery and bittersweet memories that gets the readers emotional.

Don't Read it For:
it contains a series of mysterious disappearances and her sufferings at the Miss Bodycote female Academy in Toronto.

What makes this book stand out?:
This is one of Alan Bradley Best books with this incredibly clever young fictional characters who demonstrates fortitude and bravery.

I am half sick of Shadows 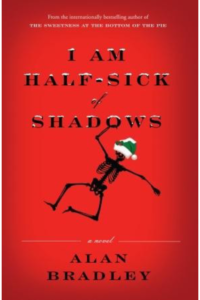 Young Flavia deals with the mysteries that comes her way amidst the blistering cold and a raging blizzard.

Read it For:
if you are looking for an action packed mystery novel, then this book is the one for you.

Don't Read it For:
if you can't face the Mysterious deaths, crimes, shocking discoveries and betrayals, then this book is not recommended for you.

What makes this book stand out?:
the author teeth is the readers to employee the use of your inherent sly wit to find out the killer who is in plain sight.

The Grave’s a fine and private place: a flavia de luce novel 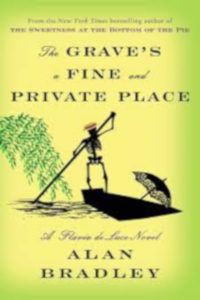 this is one of  the much loved Alan Bradley books which brings out the super sleuthing skills of  flavia and all the mystery that surrounds her.

Read it For:
the author demonstrates that nothing can stop the Quest of one who is thirsty to come out victorious in the end.

Don't Read it For:
this book is sure to leave you addicted and craving for more of those dangers.

What makes this book stand out?:
it is a bittersweet story where this young detective grows up and matures while solving crimes. 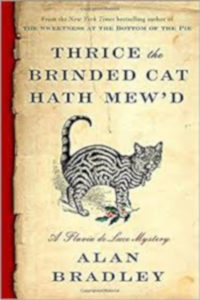 it revolves around the series of discoveries of young 12 year old flavia  once she is sails home to England from her boarding school.

Read it For:
this is the perfect book for you if you are looking for some exciting Adventures with young flavia.

Don't Read it For:
it is packed with scenes that leaves you curious and intrigued.

What makes this book stand out?:
The author makes the readers more energized with the prospect of a new investigation and uncovering of murdered corpses. 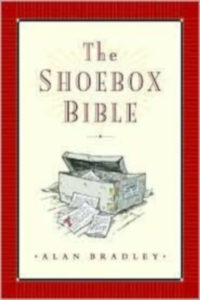 The author unfolds the series of mysterious events that occur when a cardboard shoe box which was hidden underneath a closet floor board is now discovered.

Read it For:
if you are looking for an engaging book with cold and dark war time winter scenes, then this is the perfect book for you.

Don't Read it For:
it is mystery which is left undiscovered for several years, this can leave the reader a bit frustrated reading through the events of the past.

What makes this book stand out?:
it is packed with mystery, fun and the perfect blend of melancholy and inspiration.

Don’t miss out on any of the above mentioned Alan Bradley books as each of them leave your dumbfounded and craving for the thirst for mystery.