Zane Grey, born as Pearl Zane Grey, was born on 31ts January 1872 in Zanesville, Ohio. He was an author and a dentist who shot to fame with his association with the Western genre, arts, and literature.

In 1912,  his book Riders of the Purple Sage was published and became the very first  Zane Grey best seller.

The commercial success of his books brought forth establishment and popularization of adaptation of movies and television episodes based on his books.

The more the books he wrote, the more the hatred among the critics arose. Despite all the hate he received, he was the American President, Dwight Eisenhower’s favorite author.

Grey died of heart failure in his house in Altadena, California.

Riders of the Purple Sage 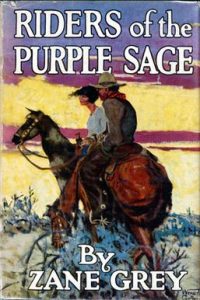 Riders of the Purple Sage is hailed as a western classic. It is the story of a gunslinger, Lassiter, who shows up just in time to save a beautiful Rancher, Jane Withersteen, from being forcefully married to a Mormon elder.

Read it For:
Being a western classic, it clears an air of suspicion that seems to have built around the genre which got exploited during the early and mid-twentieth century. The book is a great western and will be loved if you are a fan of the genre.

Don't Read it For:
The book is sappy at times, and also a bit too melodramatic. The characters have been carved out of nothing to adhere to stereotypical traits.

What makes this book stand out?:
The book is arguably the best Zane Grey novel and is one of the most popular books of its genre. The book acknowledges every ounce of recognition that Grey got. 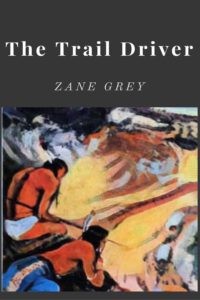 Adam Brite, the protagonist of the story, has already moved 2500 cattle along the Chisholm Trail successfully. Now, he is on a mission to buy cattle at every possible chance. He looks to recruit-able and impoverished men to look after the cattle. One such recruit is young Reddie Bayne. But, after two unwanted visitors start looking for Bayne, there is a startling learning. Things get complicated when a young girl, then, appears as a cowboy.

Read it For:
It is an intriguing and gripping western. The flavors of adventure and thriller can be experienced occasionally.

Don't Read it For:
If you are not that big a fan of westerns, you might find this boring. Although, with an equal mix of romance, thrill, and adventure, this is not entirely a Western.

What makes this book stand out?:
This book is among the highest rated Zane Grey book. Although the book went largely unnoticed by the general public, the proportion of readers have rated it as very interesting. 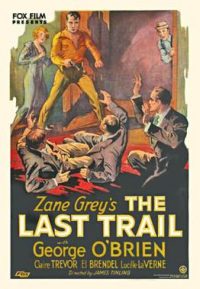 The story is set in the Ohio Valley. It beings with the white settlers are just settling in near military forts. "The West" at the time, and there were skirmishes with Indians and with bad white guys as well. The story revolves around a 16-year-old woman.

Read it For:
The story is full of tracking, skulking, shooting, and wonderful descriptions of the forest, streams, sunsets, and cliffs, which are quite rare to find given the genre.

Don't Read it For:
If you are looking for adrenaline rushes or edge of the seat, this might not be the right book. But, the story is very evenly set over genres.

What makes this book stand out?:
The book, unlike other books in the same age and genre, gives very high values to friends and relation. 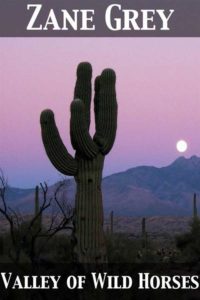 Panhandle Smith, or Pan as he is known, is a tall, young Texan. He has been in plenty of places following no law, but this valley is hell. Jard Hardman and his son own the law and rob the land blind.

Read it For:
The descriptive writing is creative and very narrative. The words are picturesque and full of passion.

Don't Read it For:
Beyond the description, the plot itself is a bit flimsy and somewhat incomplete. But, if you weren’t looking for a solid plot, you can go for it.

What makes this book stand out?:
Unlike other Westerns and similar genres, the book is not all action and no build up. The plot and scenes are very descriptive, but not prosaic.

The Code of the West 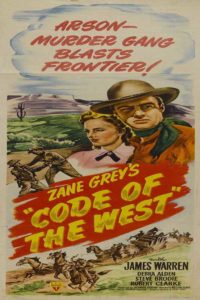 Georgianna Stockwell needs a change of scenery, and is sent to the wilds of the Tonto Basin in Arizona. But, the change in her lifestyle, all the dancing, and gadding, get her lung problems. But to take care of her, her sister Mary is ready to sacrifice her happiness.

Read it For:
This is a Western classic with all the popular Western ingredients, and family, love, and dramedy added as toppings.

Don't Read it For:
Reading this after going through a lot of Zane Grey might be a little monotonous and repetitive.

What makes this book stand out?:
The book represents Grey’s ability to whip up a story from nothing but dust bowls and sisters. 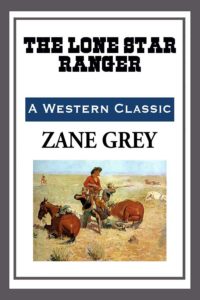 This is one of the only Zane Grey novels that has been narrated in the first person perspective. The perspective is a  US Deputy Marshall who helps the legendary Texan Ranger Vaughn Steele in cleaning up the lawless place of Fairfield. Though the town is ridden with violence from a band of outlaws, Steele falls in love with the mayor’s daughter and the Marshall with his niece.

Read it For:
The book is, again, a classic Western and makes use of its characters very wisely and judiciously. The protagonists are portrayed, one in the first person and the other in the third person.

Don't Read it For:
The book might appear to be quite slow at places. Once these parts are successfully gotten past, the book is pure pleasure

What makes this book stand out?:
The book is ages ahead of its time. It incorporates romance, adventure, psychology to dramatically build up the story to satisfaction.

The Man of the Forest 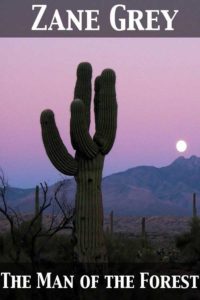 In this classic, a lone camper overhears a sinister conversation that makes him leave his wild abode to save Helen from impending doom. The man of the forest would not find it acceptable to let a murderer do away with Helen to lay his hands on her uncle’s ranch.

Read it For:
It is classic Zane Grey, fervent romanticism, poetic prose and occasional feel-good moments.

Don't Read it For:
The plot is a little predictable and monotonous, and the end is a little too exaggerated. But, the first half of the book and the descriptive word flow makes up with picturesque narration.

What makes this book stand out?:
The book reflects supreme narrative with detailed, scenic portrayal of the setting and thoughts. Other than being a little predictable, the book is almost flawless. 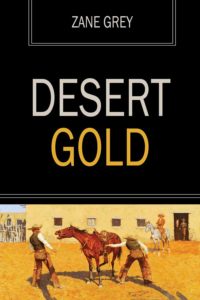 Richard Gale, the protagonist, is the tenderfoot who wants to prove to his wealthy father that he is worth something. While helping his friend rescue his girlfriend from a punk named Rojas, Gale comes across two rangers working for the Immigration Inspector when he is captured at the US-Mexican border.

Read it For:
This work is technically a Western but adds in great bits of a variety of other genres. There is plenty of stuff in it for lovers of a wide range of genres.

Don't Read it For:
The start is a bit slow to pick up. Once you are one up against the slow start, you might find the story to very male-dominated. But, the impact is very dampened with the outstanding prose.

What makes this book stand out?:
The book is a great example of slow buildup and linearly increasing intensity in every emotion it reflects. 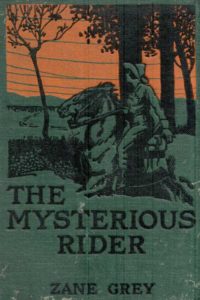 Columbine is a given up girl brought up by Rancher Bill Belllound as his daughter. When she comes of age, she agrees to marry Bill’s son Jack. But, Jack is a drunkard, gambler, and a thief. To make things worse, Columbine is in love with a cowboy, Wilson Moore. But Hell Bent Wade intervenes and promises to make things better.

Read it For:
This is, for a change, a classic substitute romantic western. The western is substituted and dominated by the romantic elements. If you were on a western or a Zane spree, this is the perfect break you need.

Don't Read it For:
The book is predictable and monotonous and repetitive for most parts. Columbine is a little ‘weakish’ as a character, and the book proceeds very slowly until the titular mysterious rider makes his appearance.

What makes this book stand out?:
As with Grey's other books, his description of magnificent outdoor splendor develops the atmosphere of this novel about conflict and romance on a cattle ranch. Strangely, the Mysterious Rider does not initially appear until the stage is set and other characters are introduced. But the wait is worth it, and the rider is a revolutionizing character, and worth remembering.

The Heritage of the Desert 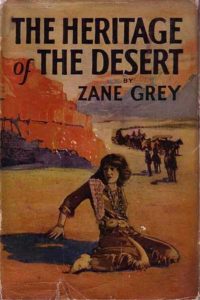 John Hare lies dying in the desert and is saved by the benevolent August Naab. While he is being looked after, Hare gets attracted to Naab’s adopted daughter Mescal. But, Mescal is relentlessly pursued by Holderness, who is untrustworthy. Following this is a great web of adventure awaiting Hare

Read it For:
This is a classic mixture of Western and Romance. The plot is straightforward but very generously written.

Don't Read it For:
The plot is simplistic and not very unheard of. One could find similar plots within the same genre or movies of the similar genre.

What makes this book stand out?:
The writing is very generous and picturesquely described. Once you get past the cliche, the setting and characters are wonderful. There are a villain and a hero, and a girl who beckons to be saved from the bad guy - a classic romantic action.