A winner of the Noble Prize in Literature as well as Pulitzer Price, John Steinbeck is the author of some of the best literary classics of the 20th Century. He is considered to be a giant of the American letter, and his path-breaking books and novels have been held in great esteemed and qualified the test of time by far.

He is the author of 16 Novels, 6 Non-Fiction Books, and 2 collections of short stories. Here are the best John Steinbeck books in order of their brilliance. 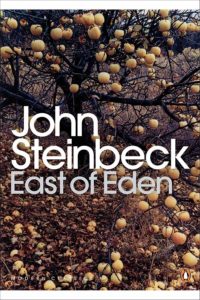 Set in Salinas Valley in California, the novel is a brutal description of the fates of two families as they contend against each other in a rivalry which can only be described as evil. The Hamiltons and Trasks continue their rivalry over ensuing generations as they seem to be unable to escape from the path set by previous family members. It is the best John Steinbeck bestseller.

Read it For:
In this novel, Steinbeck has created some of the most memorable characters in the history of Literature.

Don't Read it For:
Maybe it is best not to expect a completely happy ending, as the book continues the theme of brutality throughout.

What makes this book stand out?:
The unique description of love and the unflinching brutality of the narration make this book a must-read.

The Winter of Our Discontent 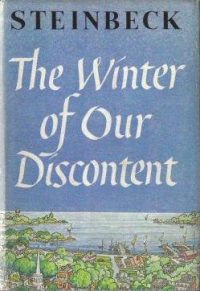 There is not a single reader in the world who has not heard a reference to the title of this book from the Shakespearean play. Following the life of a fallen aristocrat and his family, the novel describes the struggles of the characters to get used to their new surroundings and fall from luxury.

Read it For:
Steinbeck follows a tenuous line between private and public honesty. It is heralded for the immense reflection of American psyche of that time that it provides.

Don't Read it For:
There have been many copies of the theme of fall from aristocracy as it was so common after the 1st World War. This makes the main story something that we have read since.

What makes this book stand out?:
The honest description of the condition of Aristocracy.

The Grapes of Wrath 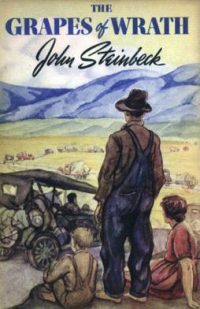 Set in the Great Depression of 1929, it follows the life of a family of sharecroppers. Dust Storms from the Dirty Thirties and the Dust Bowls drive the family from their land. The story follows the old style of their journey to the promised land of California and the distinction between the haves and the have-nots. It is one of the best John Steinbeck bestsellers as well and got him his Pulitzer.

Read it For:
The strength of the characters, with the man's reaction and anger to injustice, while his wife bears stoically the obstacles, the novel describes the terror of the Great Depression.

Don't Read it For:
According to some critics, it is too sympathetic to the working class and too critical of capitalism.

What makes this book stand out?:
It stands alone for probing the depths of the Great Depression and how it affected the different classes. 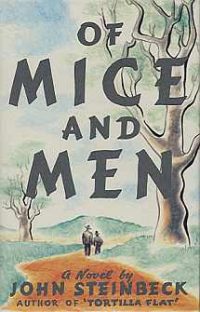 It is the story of two men, outsiders, looking to find their place in the world.  A tragedy written as a play, it follows the two men as they try to get enough money to buy their own ranch. Again set in the cruelty of the Great Depression, the story is depressing as they must struggle against the themes of cruelty and jealousy.

Read it For:
Though it was started as a play, the book found success as a novel. Made into a movie three times, the story was amazing for the search of the American Dream.

Don't Read it For:
There is no reason at all not to read this work as it is a complete masterpiece of literature produced by Steinbeck.

What makes this book stand out?:
Following themes of human feeling, it traverses a time when America was filled with the 'dispossessed' and gives them a voice.

The story revolves around a group of boys who inhabit a vacant lot down the Row in the district of Monterey, California. It tells the tale of the people in that part of the world and how their everyday life is constantly invaded by different subplots of violence, cruelty, murders and so on. It is considered to be one of the top John Steinbeck books.

Read it For:
The attempt to capture an unconventional rustic lifestyle in the sidelines of America.

Don't Read it For:
It does not have much of a plot. 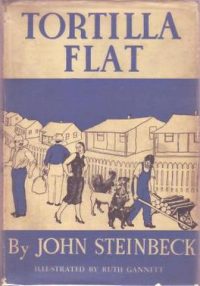 It is a chronicle of deeds and adventures of a group of knights who form a modern-day Camelot in this Arthurian style legend but only in a shabby hillside house and the knights fight battles against the rising corruption all around the American culture in their way.

Read it For:
The robust camaraderie of the knights and their somewhat tragic attempts to save what cannot be saved.

Don't Read it For:
If adult fairy tales do not appeal to you.

What makes this book stand out?:
For spinning a lovable yarn about thieves and not-so-apparently-good people but with their hearts true and in the right place.

The Moon is Down 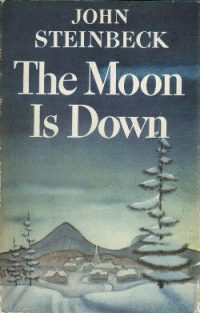 A small coastal town is invaded by a brutal army, and they have little to none resistance against them. The town is important to everyone as it has a large coal mine that supplies to all. But now it needs saving. But can it be done?

Read it For:
The feeling of impending doom and reckless struggle against the inevitable.

Don't Read it For:
Once again, if historical fantasy and made-up warfare is not really your cup of tea, you might as well steer clear.

What makes this book stand out?:
A magnificently woven tale of a small town standing up for something that matters to them. 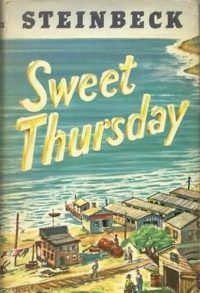 A follow up to the Cannery Row, this book once again deals with the funny and relatable yet unique everyday life of the residents of the Row. Sweet Thursday in the coastal town is the day that comes after Lousy Wednesday – one which is generally the worst in the week.

Read it For:
To know what happens after the events of Cannery Row.

Don't Read it For:
If the delusional lives of the common folk do not make a good plot in your mind.

What makes this book stand out?:
Being the honest yet curious stories of the common folk that unravel in a never-seen-before way with an intriguing set of events in an otherwise quaint town. 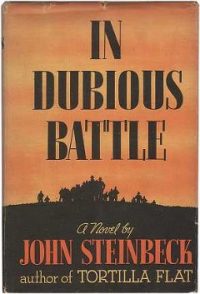 The story in California Apple Country in 1936 and follows a strike by the immigrant workers that transitions slowly but surely into something ultimately fanatic. The story is incredible as it talks about the unsure nature of the entire strike and the division among ranks.

Read it For:
The true and bloody nature of the story about the conditions of the immigrant workers in that time. It sets a stark contrast to what was the opinion and views of the society.

Don't Read it For:
Do not read it for a story of action and adventure as it is more an exploration of men's minds.

What makes this book stand out?:
The desperate and honest description of the change in human nature when the mob mentality sets in.

To a God Unknown 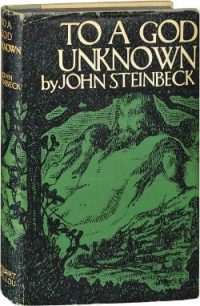 Again set in California, the story follows the son of a prosperous farmer. He comes to believe that a tree embodies his father's spirit, and he shares his prosperity with his brothers and the rest of his family. Somehow a brother kills the tree and brings disease and famine to the farm

Read it For:
The sheer belief and willpower of a family and the small things on which it hinges. The work is incredibly stark of a rationale and delves into superstition and faith.

Don't Read it For:
Set in California again, this is not a book you read if you want a change of scenery from the usual books of Steinbeck.

What makes this book stand out?:
The description of a family's fight with the inevitable forces of nature.