Erle Stanley Gardner was born on July 17, 1889, in Malden, Massachusetts. He was an American author and a lawyer. The advocative mindset inspired him to write a variety of detective books. Among these, the Perry Mason Series of detective stories stand out prominently.

Gardner also wrote under a large number of pseudonyms, among whom a lot of them became well known among the regular readers of the genre. The most popular of the pseudonyms include A.A. Fair, Kyle Corning, Charles M Green, Robert Parr.

The Case of the Velvet Claws 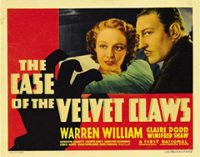 This is the first part of the very long series Perry mason’s detective stories. The series consists of 86 books, and most of the long list is beloved to the readers. Perry Mason, in this book, takes on Eva’s case. Eva’s husband, George Belter is shot in his chest after a bath. His will is forged and is seen to benefit her nephew, Carl.

Read it For:
Gardner writes the first book for Perry Mason, and it is rated very highly by the readers. The crime and deduction are top notches, and the plot simplistic and humorous at times.

Don't Read it For:
The characters do not follow a great background and are stereotyped a little to benefit the plotline. But, considering this as a crime, you can definitely overlook the development, and get down to the action right away.

What makes this book stand out?:
Gardner was a lawyer with the gift of writing. He expertly puts his expertise into words and whips out an Eric Stanley Gardner best seller.

The Case of the Sulky Girl 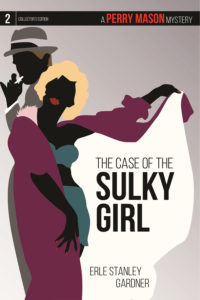 This is the second installment in the Perry Mason series comprising of detective novels. After the first adventure, Perry is back with another adventure/case. Frances wants to wed. But her father’s tragic will dictates no marriage for Frances, failing which she would lose millions of dollars.

Read it For:
Gardner gratuitously adds a simple and mind-bending plot complex as a problem with inheritance. But, once we get past that, Gardner is awaiting with a crispy murder mystery.

Don't Read it For:
The start is quite slow and beats around the bush a little. The actual story and content begin a little down further. But the story is worth the ‘prologue’ start.

What makes this book stand out?:
Gardner is back with another Perry Mason case, and he makes a good setting for the murder through another case. This is a double treat for the price of one, and also an Eric Stanley Gardner popular book.

The Case of the Lucky Legs 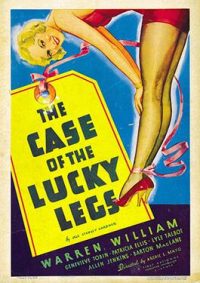 This is the third installment in the Perry Mason series, and also a hit after a grand reception of the first two books.Frank Patton is a tall and handsome punk, who also has persuasion up his arsenal. He runs a competition for girls with beautiful legs with utmost prudence. When Mason is onto him, he gets a knife in his chest.

Read it For:
The detective work is crisp, clean and tidy. There are no prolonged courtroom drama or unnecessary investigations. Perry Mason does his job to-the-point.

Don't Read it For:
The plot is predictable, and the villain well introduced right from the start. But, disregarding this a crime and discounting this a thriller, the book is a great piece of work.

What makes this book stand out?:
The book is a classic crime work, and appealing largely to greenhorn and amateurish audience. With a different flavor added to the same series of books, Gardner comes up with another popular Eric Stanley Gardner book.

The Case of the Howling Dog 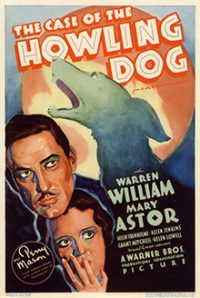 The book is about a feud between the Foleys and Cartwrights, two neighbors. They fight each day incessantly, about Foley’s dog who barks right into each night. When Mason steps up to investigate, Foley is with a missing wife, a poisoned dog, and a corpse.

Read it For:
The book encompasses courtroom drama finally, after avoiding the desired destination for the past three books. The scenes are tasteful, and never repetitive.

Don't Read it For:
The book is a decent mystery but lacks character development. All the roles look predictable, and the motives decrypted.

What makes this book stand out?:
Gardner comes up with a juicy case, but not something involving a murder or a mystery. This is an unofficial and informal complaint which leads to a set of threatening cases. This offbeat case prods many readers to reward this with the honor of the best Eric Stanley Gardner book.

The Case of the Lucky Loser 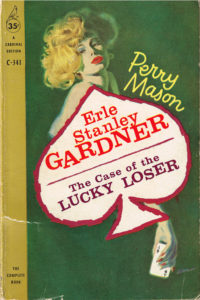 Ted Balfour is a gambler and is accused of being a murderer, drunk driver, driving over a corpse, and destroying a person beyond identification. His relative’s secretary alerts Perry Mason of false testimony from an uncle in Mexico. But, as expected, Uncle Guthrie from Mexico calls up Mason through his wife, who has prepared “a dish .. expensive plaything”.

Read it For:
The end is pretty exciting and different and catches you gasping for breath. The plot, in itself, is very exciting and unexpected.

Don't Read it For:
The descriptions in this work are a little taxing. There are a few instances of excessive rambling about obsolete contraptions. But, once this is gotten past, the thrill is a 100 percent.

What makes this book stand out?:
This is the fifty-sixth book in the Perry Mason series and is yet among Eric Stanley Gardner best sellers. This shows how well versed Gardner is with his knowledge and skill, and how relentlessly his readers are consuming his works.

The Case of the Mythical Monkeys 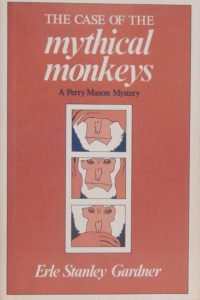 Gladys Doyle is rewarded with a ski weekend by her employer. The weather is in bad shape, and forecasts of storms are everywhere. On the D-Day, she is forced to share a mountain cabin with a complete stranger. When she wakes up in the morning, the host has mysteriously disappeared, and there are a corpse and Gladys’s fingerprints all over the weapon. This is the time for Mason to step up.

Read it For:
The buildup to the crime and deduction is top notch, and the story is intriguing. The end is satisfactory as well, with the perfect amount of cliffhangers, all at the right places.

Don't Read it For:
Although the characters are wonderfully written, you will feel bereaved by Gladys’s lack of imagination and skillfulness. There is some dejection in very few instances, but the downs are graceful

What makes this book stand out?:
The name is quite misleading, works out well in our favor. The plot is very enjoyable and is among the Eric Stanley Gardner best sellers.

Top of The Heap 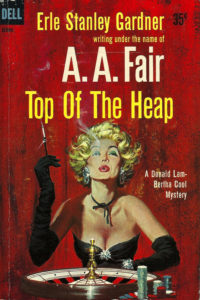 When a notorious gangster loses his gorgeous girlfriend to a curious case of vanishing, the last man she was seen with needs a strong alibi and quickly. Cool and Lam send up one of their main men to investigate, and he wastes no time in meeting two women who claim to have been with the client during the night of vanishing.

Read it For:
Top of the heap is the thirteenth book in the series featuring Cool and Lam, skillful detectives. The guys are as cool as Perry Mason, and Gardner maintains his reputation, even as AA Fair.

Don't Read it For:
The plot is flimsy and gives way when applied some thought on. The outcome is known from the start, but the approach to it is flamboyant.

What makes this book stand out?:
This is Eric Gardner writing as AA Fair. He maintains his panache despite the alias. The book is fresh and is an Eric Stanley Gardner, best seller as AA Fair. 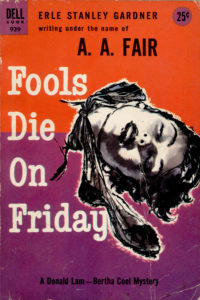 This is the eleventh installment of the Cool and Lam detective series. They are approached by a young woman, who claims to be Beatrice Ballwin and offers a lump sum of dollars to make them prevent her aunt from poisoning her uncle.

Read it For:
This book is a great mystery with good character background and plot setting. Cool and Lam are great detectives, and AA Fair has an extensive knowledge and immense creativity.

Don't Read it For:
If you have read a lot of mysteries and thrillers, and are familiar with Gardner’s works, this might not promise anything entirely new other than the plot. But, considering this as a mystery, the book is a great work.

What makes this book stand out?:
Gardner writing as AA Fair seems to know what his audience wants and is coming up with that time after time. If you were away from the genre for a bit, this is quite a refresher. 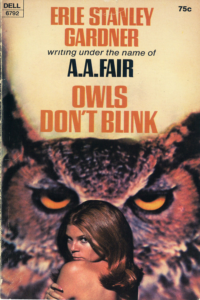 This installment finds the pair of Cool and Lam in 1942, hired by a client in New York. The client seems to have made no mistake while the pair is hired a long way away from home while he could have easily hired a Private Investigator to get the job done.

Read it For:
The book shows great presence of mind displayed by Lam and Cool in bringing their suspicion to facts. The story is new, and they don’t falter to run away and approach carefully their fears

Don't Read it For:
The story is predictable, but is again, not to be classified as a suspense thriller. The plot is decent at best, but the mettle that the characters show is immense.

What makes this book stand out?:
Gardner whips another good book, and this shows the complex chemistry shared by two fictional characters in amazing light. The book also throws light on Gardner’s exquisite thinking. 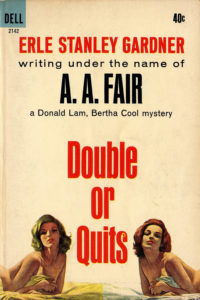 While cleaning up a doctor’s safe, looking for stolen jewels, Cool and Lam come across a suspicious death, bluffs, a custody battle and blackmail, and double indemnity.

Read it For:
This is a classic murder-mystery-suspense thriller with a murder and other crimes. Cool and Lam have to overcome obstacles and false witnesses to get hold of the criminal who has wreaked all this havoc.

Don't Read it For:
If you have followed Gardner or any of his pseudonyms for long, and are comfortable with his writing, you might want to avoid this. This, although is a classic mystery, is pretty straightforward, and might be disappointing.

What makes this book stand out?:
Gardner comes up with a classic mystery for the sixth installment of the Cool and Lam series. After all the complex cases he whips out, this seems mundane, but we feel like this was a break we deserved.