Douglas Noel Adams was an English essayist, script writer, humourist, and dramatist. Douglas Adams is known for his most famous work, The Hitchhiker’s Guide to the Galaxy, that originated as a radio comedy before being translated into a trilogy of five books that later became one of Douglas Adams best sellers. Adams was better known as a conservationist and an advocate of environmentalism. He is has a record number of books to his credits and many has earned him a number of laurels. He was also a devout atheist.

Life, the Universe, and Everything 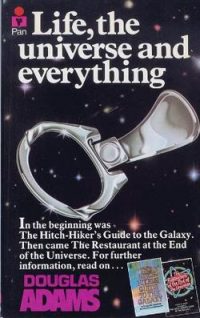 The inhabitants of the planet Krikkit are unhappy and tired of looking at the night sky above their heads. They decide to destroy it – the universe. Now, only five individuals stand between the universe and their dream of total annihilation.

Read it For:
The book will put a smile on your face. The plot is simple, and there is enough humour to laugh, and not smirk.

Don't Read it For:
The story is too superficial and way too futuristic. Compared to the first two books in the series, this book is not quite an easy or fun read. Clever passages are fewer and may get boring.

What makes this book stand out?:
One of the most plotted in the series, there is a sense of wonder about the people in the universe. The fictitious story line is also interesting.

The Restaurant at the End of the Universe 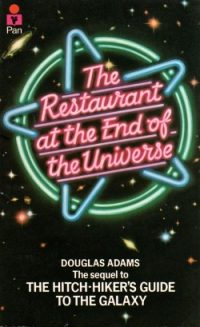 The Restaurant at the End of the Universe is the second book in the Hitchhiker’s Guide To The Galaxy comic science fiction series. The book tells the story of the universe and the warlike situation in different universes.

Read it For:
Reading the book can be more of a search for meaning, and it is a pure science fiction that questions our knowledge about galaxies and universe.

Don't Read it For:
The jokes are of poor taste, and the story becomes boring after a certain point in time. The book doesn’t factor into the sequel very well.

What makes this book stand out?:
It is one of the best Douglas Adams books. It is a sequel to his most popular work, and the book is one of its kind. 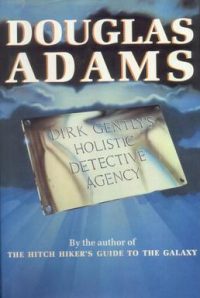 Todd Brotzman has a simple happening life, but the worst awaits him. When he is sent to the penthouse of the restaurant, he finds that the wealthy Partrick murdered.

Read it For:
The mystery element in the story is beautifully embellished and has a lot to tell. The story keeps you flipping the pages, and an odd chain of events unfold as you progress.

Don't Read it For:
The ending of the book is quiet unusual and trying to understand the plot will be like trying to make a submarine out of cheese.

What makes this book stand out?:
Every page is filled with wonderfully witty and fascinating quotes that will never fail to amaze or delight you.

So Long, and Thanks for All the Fish 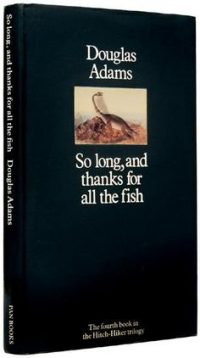 So Long, and Thanks for All the Fish is the fourth book in the Hitchhiker’s Guide To The Galaxy series. The book tells the story of a space ship landing on earth on a rainy day and the subsequent events that follow.

Read it For:
The book seems different compared to other books in the trilogy, and the book is out of the league. The book is no longer a science fiction as Adams comes back to earth. The major portion of the book is the love story.

Don't Read it For:
The plot is tight, and the story is something of an anomaly. After being kicked out from the universe, the hero falls into a conventional love story.

What makes this book stand out?:
The creative density of the story is worth mentioning. Though the book is not over whelming like the rest of the books, it has quite a jump in characters and a strong storyline. 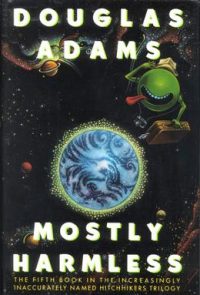 Mostly Harmless is the fifth instalment book in the Hitchhiker’s guide to the galaxy comedy science fiction series. The book portrays the whole creative writing prowess of Douglas Adams and is the best Douglas Adams books in order.

Read it For:
Though regarded as the weakest book in the series, the inappropriately named book has an amazing story line and is an easy read. The simple plot makes it easier.

Don't Read it For:
The usual humour and the manic pacing is lost in this book as the author claims to have written the book in the worst year of his life and it is evident in work.

What makes this book stand out?:
Though many claim the book to have a disappointing ending, the creativity is at its heights and is a must read for those who are looking for a mild slow easy read.

The Meaning of Liff 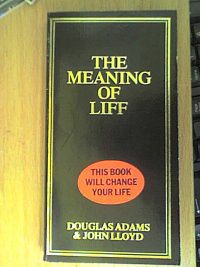 The idea of Meaning of Liff came from an old school game and had its inception when Adams and Lloyd were on holiday together. The story tells that in life or liff, there are many hundreds of common experiences, feelings, situations and even objects.

Read it For:
A wonderfully creative book in itself, there are definitions that can be just read and random and will make perfect sense. The beautifully quoted examples just add to the charm of the book.

Don't Read it For:
You need the right type of sense of humour to enjoy the type of jokes in the book. If you are looking for something with a plot, this is probably not your cup of tea.

What makes this book stand out?:
Pure unadultered Douglas Adams is what the book is all about. A perfect blend of humour and facts, the book is a must read. 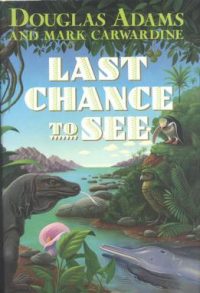 Last Chance to See is a book that accompanies a radio series. Through the very funny and moving story, Douglas tries to bring about a variety of flora and fauna in front of our eyes.

Read it For:
The book is basically a travelogue where in a writer and zoologist travel the world to find exotic and endangered species of flora and fauna.

Don't Read it For:
It seems to happen in a place we have never been to, and it is too surreal to even relate to the book.

What makes this book stand out?:
A perfect whisk of amazingly funny and yet deeply saddening. It is one of its kind.

The Long Dark Tea-Time of the Soul 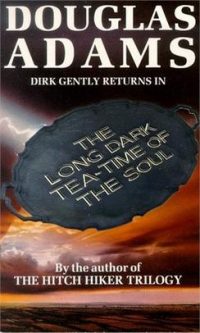 The Long Dark Tea-Time of the Soul is a humorous detective novel by Douglas Adams. When a passenger check in desk in London’s Heathrow Airport disappears in orange flames, it is considered as an act of god. Is it so?

Read it For:
The perfect combination of humour and mystery will keep you entertained and enthralled till the very last page.

Don't Read it For:
The magical realism in the book may not be liked by everyone. Sometimes, the plot is also much of a mystery.

What makes this book stand out?:
The long running story, the wicked humour and wonderfully insightful outlook make the book special.

The Salmon of Doubt 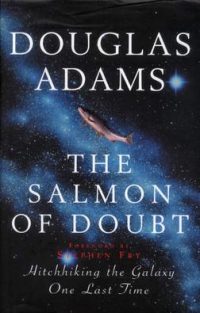 Hitchhiking the galaxy one last time is the posthumous collection of all the previously unpublished works of Douglas Adams. A learning experience is what the book is.

Read it For:
It is not a single novel. It is rather a collection of goods pulled out from Adams computers after his death. Every page tells a rather new thing about him.

Don't Read it For:
It is not entirely a story. It is a collection of unfinished stories, e mails and writings that Adams left behind.

What makes this book stand out?:
Considered to be the last of Adams works, it has more of an emotional value associated with it. It portrays the love of his wife, children, friends, and editors. 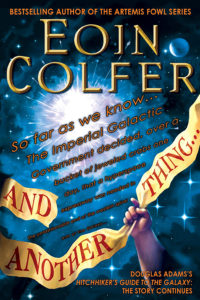 And Another Thing...  is the sixth instalment book in the Hitchhiker’s guide to the galaxy comedy science fiction series and continues to tell the tale of the universe.

Read it For:
There are quite a number of instances and pages worth quoting in the book, and the sense of humour is ever present in the story.

Don't Read it For:
As the trilogy continues to extend, the story line becomes monotonous.

What makes this book stand out?:
Improbable events and zany characters.